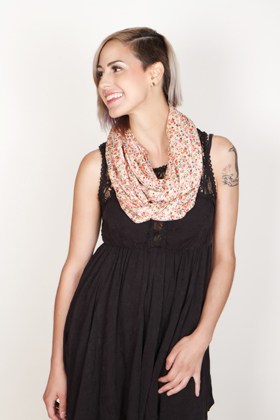 Gillian Thomson is a contemporary and jazz influenced vocalist, songwriter and performer who is a true alto but also sings in some of the tenor and soprano range. She has for many years been a singer and songwriter in an original soulful indie pop band Sister Says, in her pop and soul cover band Full Spin at private events, as a duo performing pop, soul and jazz standards and in Top Line Vocal Collective Choir as a tenor.

A proud mixed self-identifying Indigenous-European artist, Gillian also regularly performs at Indigenous and community events connected to social issues and justice. Growing up in her pre-teens and into her teenage years Gillian studied with well respected jazz vocalists Kate Hammett Vaughan and Bonnie Ferguson and took piano briefly as a child.  As a young adult she studied music theory with skilled guitarist Johannes Grames and performed in a jazz duo with him, performing songs made popular by the likes of Billie Holiday, Nina Simone as well as covers of pop music with a jazz twist. Gillian has also taken lessons in areas such as voice, theory and piano with other accomplished local musicians such as soul singer/artist Dawn Pemberton and composer/multi-instrumentalist Mike WT Allen.

Currently Gillian studies at Vancouver Community College as a full time voice major in a diploma program where she hopes to continue to expand her knowledge of music because one can never stop learning. Gillian also holds a certificate in Arts and Entertainment Management through Capilano University which she has used to manage her own career as well as help other artists including members of the multidisciplinary and theatre community. Previous musical performing experience includes touring around BC with Sister Says in Smithers, Kispiox and Haida Gwaii, as well as in Ontario and internationally in Beijing. Gillian often performs at sit down settings such as the Sylvia Hotel Lounge as a duo and has performed with artists/acts such as Claire Love Wilson (singer-songwriter folk), Tonye Aganaba (R&B and soul), Ndidi Cascade (hip hop), OHR Afrika Collective (afro-beat fusion), and Withe (singer-songwriter folk) at festival and club settings.

As a vocal coach and music teacher she has taught vocal and songwriter workshops at festivals and places such as Edge of the World Festival, North Vancouver Arts Council Kids Summer Camp and at Skwachays Lodge as part of her artist live/work residency in 2019. She is a member of experimental theatre company Boca Del Lupo’s 3.7 Initiative, an all self-identifying diverse performance/theatre collective. Previous acting and theatre related training includes being a member of the Full Circle Training Ensemble and Urban Ink Collective. Acting credits include Silenced (multidisciplinary theatre by Urban Ink Collective) at rEvolver Festival and Red Girl (independent short film by Patrick Shannon).